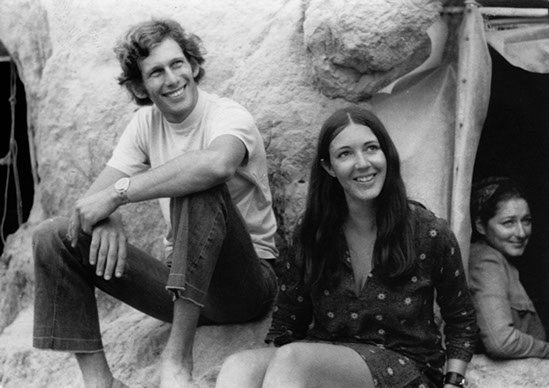 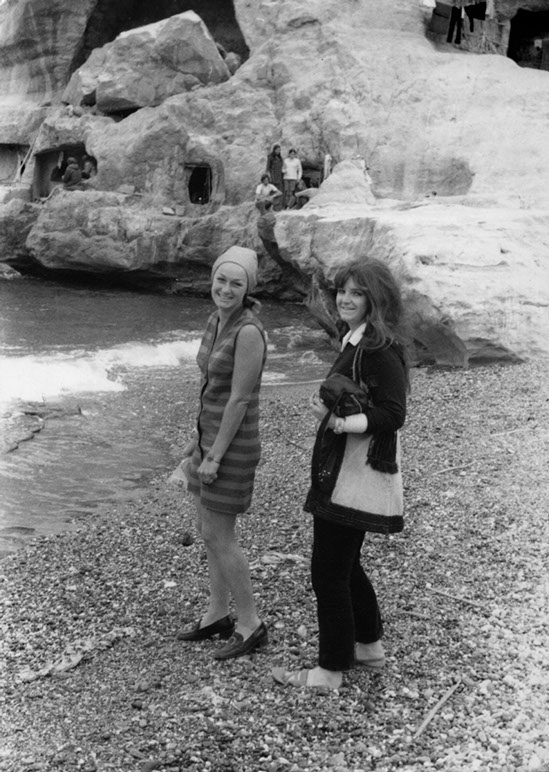 1st photo is Monty Cordony, myself Barvara, and Lisa (all Australians)

2nd photo Two Australian girls, with caves in the background.

I don't know who took the photos or how I got them, as I had lost my camera by the time I arrived in Matala.

I have photos and stories of Matala.

I am from Sydney Australia, and have met Pam Bailey but we never knew each other in Matala. I am trying to locate people. I would like to contribute my story and photos to your web site There were a noisy group of Australians, and that was in Sept 1968, with stories to tell. I have been able to find about 4 of them.

[...] Meanwhile I will send you my story and photographs.

There are several people I would love to find, and maybe they may read your web site. I really appreciate it.

Barvara Hush (then known as Hush)

Barvara refered to her story in  the book ‘The Myth of Matala’,

which I thankfully copy here :

I cannot remember how I got to Matala. I stayed in a hostel, in Heraklion I think, as I remember meeting up with two Canadian girls. I think we took a bus to Matala and I don’t recall anyone telling me about the place… but I expect they did. In the village it was amazing, to see lots of young travelers, from all over the world in this what appeared tranquil setting living in caves! The one an only restaurant called the ‘Mermaid’ was a good place to get news. Where to go, and who was leaving for Athens, or a ride or travel companion.

When I arrived in Matala, I was so amazed to run into an old Australian friend Carol Glass, I had met from Franco Spanish days, there were also a couple of other Australian girls living in the caves named Wendy Purdy, and Patti Townsend. Every day people were coming and going. Carol found a good ‘waterfront’ cave for me, next to hers (someone was leaving) not sure if I shared it or not. I remember the shelf like structure inside and sometimes wondering who had slept there previously, and years past. It was pretty clean; we would clean them out, and made it quite livable, even decorate it with various driftwood, stones and shells. I also remember discovering a bone that looked like a child’s ulna… my imagination went a bit wild… was it a Ieper’s bone? We used to look for leaves, or straw to make the surface softer to sleep on… some others there had all sorts of gear, sleeping bags etc. I just had basics. I never really carried a backpack. I had a suitcase, totally impractical!

I used to sit on the rocks in the evening after a hot day, I don’t remember swimming there much… Not far from my cave there was ‘shit cave’ people would go there for that reason, and the cave was washed out at high tide… perhaps that is why I did not swim much as I wanted. There were times we would visit each other’s caves sometimes to share meals or a smoke. There was plenty of grass around to buy, but I did not know of any hard drugs. I also remember running to the ‘Mermaid’ to buy rice puddings when I was stoned usually after sunset… they tasted so good!

I also remember very well Rene the Italian guy… he was a character, he seemed to be very stoned most of the time. He did not speak much English. He was respected though as he was supposed to be a well known Italian poet. Carol Glass reminded me on an incident when Rene was on his way to ‘shit cave’ at night, and fell into the water, wearing a coat… All we could hear coming from the water was ‘shit, fuck, shit, fuck’.

One of the most exciting times was the day that the Beatles released the LP Abbey Road. Wow! that was so cool, to think that we were listening to the music the day it was released in UK, in the Caves of Matala! Someone bought the LP in London, flew out that day to Athens, took the boat to Crete and somehow that night we all shared the sounds… It was amazing especially in those days. People had all sorts of electronic set-ups in their caves. We were so excited!

Another interesting experience was another old friend of mine, Monte Cordony from Australia somehow turned up in Matala, on his way to Afghanistan. A day later another group of Australian friends Jap, Lisa and Meliss turned up after a detour. They were traveling from India on the way to London! I don’t know how they heard about Matala. They wrote home telling their families, they had met me staying at the ‘Matala Hilton’!

Matala was a real melting pot of ideas, a lot of talent, singers, people playing guitars, potential poets. We all dreamed of a kind of Utopia. The Greek people must have thought we were all crazy at times, except for the owner of the Mermaid, who did a roaring trade. Anyway I was so pleased to experience Matala, and so it was great to meet so many amazing crazy people… I travelled onto Turkey afterwards.

In Matala, life is lived by young travellers,

in caves by the sea, once tombs of yesterday

Many long haired, and some confused.

Searching for Utopia in this small community

To the bewilderment of local Greeks

Dreamers meet, by the one and only water pump,

The well of tester years, communal of course

At magic time, travellers assemble on the sculptured rocks

applaud a sunset, or sing a song to the African wind

From a distance ant like activity scales the face of cliffs,

Bending and standing in the lavender sea of Zeus

Invited a fire and another smoke, solve world problems,

At night guitar strings slide past, the ivory beach, the dotted lights,

embedded in cliffs, time for a rice pudding or ouzo at the Mermaid

Later I sleep on stone now a bed, look around and wonder of past

dwellers, a tomb perhaps once a Ieper colony?

Even in this small world now so tranquil and free some