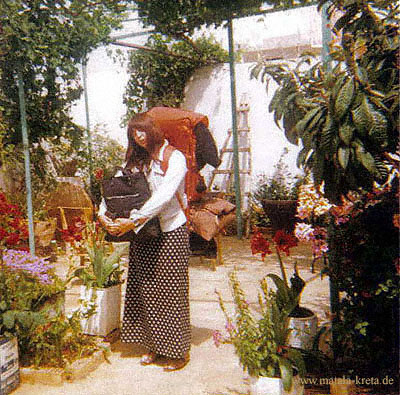 By the way,
Ria was the very first

who wrote to me with

her story.
Then this website was nothing more than the Time-Live-article

and a few lines

I was in Matala together with a friend, from may 1 till june 4, 1977. Even then there still were a lot of young people from all over the world. The caves weren't inhabited anymore. People slept in tents on the beach or under the trees. Or in a cottage from the local people. It was deliciously primitive and days were filled with partying, drinking and smoking.

We went to Red Beach where we filtered water from a well through our indian shawls (to keep out larvies). And Komo Beach was a nude beach in the close vicinity.

Ten years ago I went back there. Quite a disillusion!

My friend and I were about 20 years old and we went to Greece intending to help with harvesting oranges there, but we never saw one orange, haha...

We took the train to Brindisi and there we had to wait a night for the ferry to Patros, the harbour of Athens. The ferry was packed with gipsies. I guess they had a huge meeting somewhere, I don't remember. Inside there was only one big and filthy room to sleep for everyone, so we decided to sleep on the deck. We had, this being the flower power time, a lot of rings and bracelets end such and those gipsies wanted to swap them all with their own.

In Athens we stayed two nights in a youth hostel, where we met two German girls, Jutta and Conny, who went to Matala too. The next day we all took the boat to Herakleion and from there by bus to Matala. The bustrip was an event in itself, everything being quite primitive in those days.

The first few days we slept in a tent, close to the beach. Then two Canadians arrived who we had met earlier in Brindisi and together we rented a little shack in the upper left corner of the bay, so opposite of the caves.

Around that time the caves were still accessible but no longer inhabited.

In the town of Matala there were a considerable amount of youngsters from allover the world... Some (the hard core) were there already for months, others remained a couple of days up to a few weeks, and of course it was partytime every day. There was a town square with a small café where everyone 'got together' and where one could get pita [flat pocket breads] etc.

The same music tape was played over and over, but it was 'the better kind of music' haha... At that square was also a stand... kiosk... for cigarettes, but when I went back 10 years ago I couldn't find it back.

The bus stopped there too and it was interesting to see who came and went.

One night we went to Red Beach with 10 - 15 people. I don't remember why we went at night, but it was a dangerous trip in the dark, with backpack and all, rocks and thorny bushes. So battered we arrived and stayed for a few days. Red Beach was a paradisiac nudist beach but there was absolutely 'nothing', hence sieving water from a source with an indian cravat. By day everyone ran around naked, except during the afternoon hours, then it was too hot. Then we all pulled something on, except one of those Canadians. Resulting in him turning red like a lobster. I still remember seeing him rubbing in his family jewels with creme. Haha!

On the other side of Matala lay Komo Beach, also a nudist beach. There we went too, time to time. We didn't bring much money, but every morning we had brunch at the beach. Everything was still real derision-cheap, then.

Inbetween we went on a trip, hichiking to the palmbeach of Vai. But it was nohing like Matala, so we were back before they missed us, haha.

After a month however we were out of money and went back to Athens. Our money took us to the Greek-Yugoslavian border and from there we went hitchhiking home.

In our hometown we worked and saved money for our next trip, harvesting grapes in France. We went and didn't see any grapes, just as we didn't see any oranges in Greece, but that is a different story. Both stories are the kind I treasure for the rest of my life.