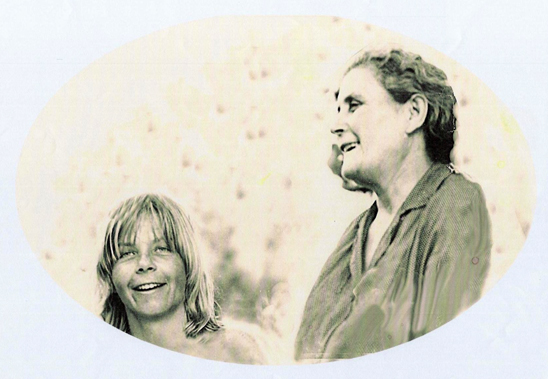 I was in Matala from January to June 1974. The caves on the beach were closed so we lived in the caves between Matala and Red Beach. I was with a canadian guy called Gerry and our cave had a tree growing out of it. It's still there and in 2004

I met a girl called Theresa who had been living there for 8 months.

My memories of Matala are special, the early morning sun, the mermaid cafe which always seemed full of dogs, and Nicos, a local fisherman who made the best omlettes ever.

Mama was the kindest. She kept letters for us 'c/o Mama's Store', and made the most fantastic orange cake. Her rice pudding was also something special.

I sometimes helped her in her store, clearing up or watching her bake which Papa (her husband) didn't always appreciate! I've attached a photo of Mama and myself.

I remember Gordan and Gerry, two Canadians who been living in Matala for over

a year, Maria a german girl (who adopted one of the many dogs in the village) Barbara, an American who was writing a book, Edwardo and Alexandro, two Italian guys, Roger, and Dominic, a french guy who had deserted from the army.

A thousand memories, which have stayed with me over the years.