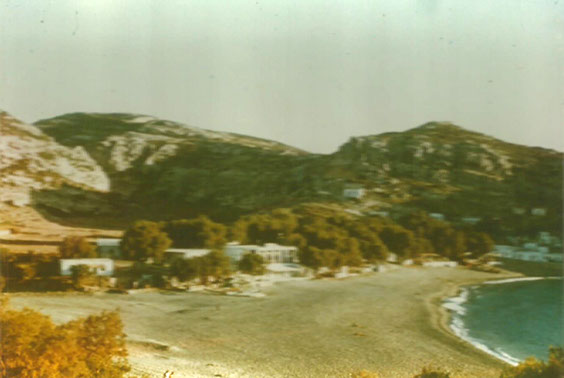 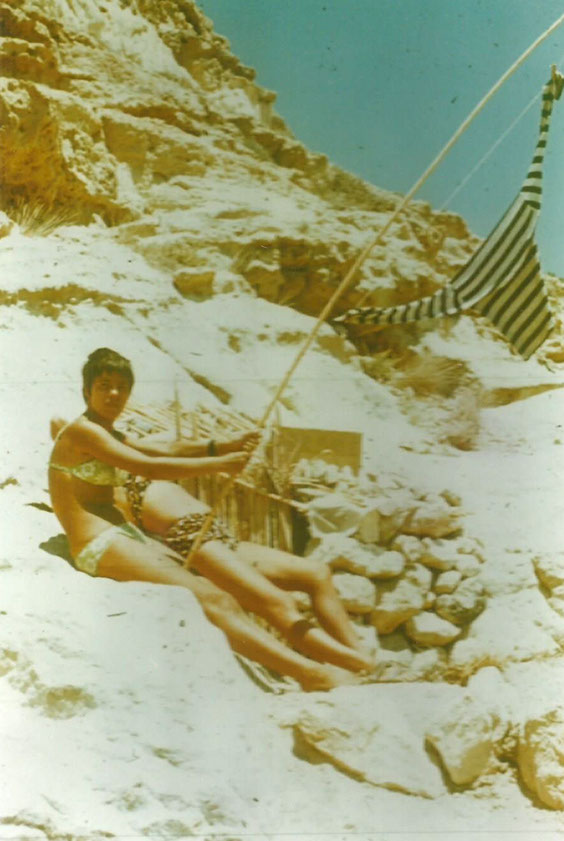 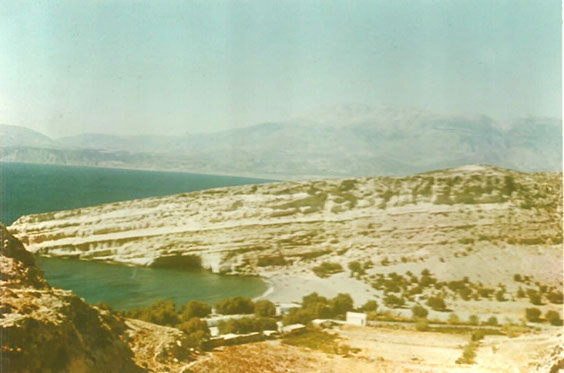 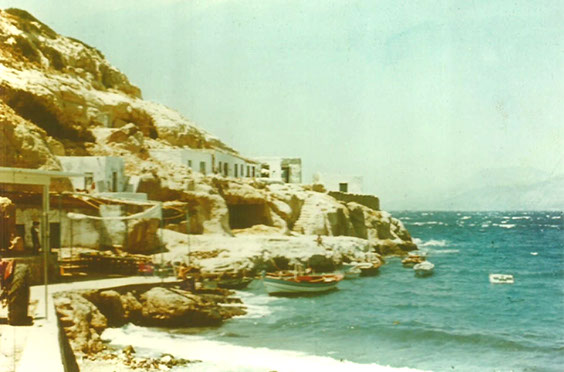 In 1969, aged 20 and still at university, I got a plum vacation job teaching French and Latin to the daughter of a Greek-American shipping magnate sailing around the Greek islands and Turkey for two months on a 100-foot yacht. I sampled a millionnaire lifestyle at the Astir Palace Hotel in Athens before we put to sea at Piraeus. Aegina - Hydra - Spetsai went by, with champagne and steaks and swimming in idyllic coves - and then a squall came out of nowhere bringing gales and a huge tidal wave. Terrifying. The ship was wrecked and thrown sideways on a tiny uninhabited island, and had to be towed ignominiously back to Piraeus for repair. I was left on the quay with an open air ticket back to London. So what did I do? I did what any young adventurer did in those days - I hitched to Matala and stayed there for six weeks. I got arrested by the police for stealing roadside grapes, narrowly avoided rape, listened to The Beatles' White album blaring out every night from Delfini's, found a local dentist to have a wisdom tooth removed and had to barter for an anaesthetic - and when I ran out of money, I went back to Athens and sold a litre of blood at the hospital to give me enough drachmas to see the sights before I flew home to London.

A few months after getting back, I wrote down my thoughts about Matala (attached below). Looking at it now, my prose was about as purple as you can get. But strangely, it brings it all rushing back: the people, the Perseids, a holiday preserved in amber. I didn't mention in my memoir that the police raided the caves while I was there, and everyone who'd sold their passports for a tidy sum to help political prisoners - these were the days of the Colonels - fled into the hills leaving Matala deserted, and came back later. Nor did I mention the sandstorm on Red Beach. Nor how everyone bewailed the lack of good breakfast coffee at the Mermaid Cafe - there was Nescafe instant or syrupy Greek. Nor the night I woke up on the beach so stoned that I had no idea where in the world I was, and howled at the moon.

I'm 73 now, and I shall never forget that summer.

In June 1970, The Times somewhat quaintly noted the clearing of a hippie trogodytic colony on the south-west coast of Crete.

Imagine yourself on the oldest road in Europe, skirting the peaks of Mount Ida across the yellowed plateau of the Palace of Phaistos. Linger long enough to sense the inevitables: awe, humility, exhilaration. Then leave the main road and head southwards over an equally old, more primitive dirt track. A few miles of white heat will lead you to the Libyan sea, to the caves and prehistoric cliffs of Matala.

How many pasts can haunt such a place? Crete’s guerrilla prowess momentarily flickers as a rider appear above a rocky slop − black-banded head, magnificently booted and breeched, eyes deep-hidden in focus over the horizon. The sandscape shrivels another fraction about a withered peasant woman swathed in black woollen, slow sidesaddle and rhythmically beating rough-skirted legs against the flanks of a heat-docile donkey − Anno Domini 20th century.

Strangely, the Matalan caves suggest a greater human warmth than do the people. They have retained the domestic individuality first created by the Minoan port-dwellers of 2001 B.C., each cave with its square walls, domed ceiling, carved bed and sandstone headrest. After the Minoan cataclysm silence reigned upon Matala; the bones of common Romans were laid to rest there and can still be found. Only the shiny grey snakes have witnessed the passing of ages and nations with their sly, poisonous eyes.

And yet, even to prehistory Matala forms a background, where the giant striated white cliff slices into the lapping lazuli waters which spread out motionless into Ayia Galene − Holy Tranquillity (so called because they form a thin haven outside which − as St Paul found to his cost − the Meltemi wind hurtles sand and water around the shallows of Myrtis and the isle of Cauda. The dazzling celeste-white of sea and encrusted cliff boasts no age: older then the Madonna whose colours it bespeaks; older than the Snake Goddess, one-time omnipotent divinity in Crete − adorned more mysteriously than either deity. On the cliffs, in the caves, you walk on, sleep on fossils. Among the wind-havocked ridges and amidst the heavy scent of drying herbs, ignoble-ugly wild onions, they lie embeeded, bell-like, shell-like or weirdly turtle-backed. Here, where the sun cracks between twin islands into a bowl of rock to create an oracle older than man himself, tempus stat and infinity begins. Above, always the mountains, shifting purple and brown, most mocking at sunset, like all beautiful things of Crete.

And Matala present? Dry dirt, melon rinds. Above all the world’s wanderlust − its youth. From Europe, America, Scandinavia, the Orient they come, impelled by a common awareness of the vacuum in civilised society. The security they crave manifests itself in the wonted domesticity of the Matalan caves. Blanket, kerosene lamp, blackened pot − these constitute an anti-home. And the inhabitants tumble down, up, from rock to dusty rock, spatial recognition lost to the winds in their fey beatitude. Some risk their lives underwater spear-fishing the deadly Moray eel and inky squid, oar hunt for shells on Long Beach; others make the precipitous journey to the naturists’ paradise, the coral sands of Red Beach; others less vigorous than their fellows lounge on the beaches or indulge in the universal pleasures of chillum and water-pipe. Nobody interferes. The police imprisoned and tortured their scapegoats, but this is now just a part of the annals of Matala.

The tourist is fascinated by the troglodyte phenomenon. The hippie is content to fascinate − it can be financially rewarding. Italian René leaping (Ciao!) out of his cave stoned to the world; Cerberus the Greatest Dane of them all, stalking the beach with diminutive mistress; Steve of mincing voice and rolling cowboy gait; Gert, the tallest man in Matala, wreathing his cage-ribs with rose-petal fingers and grinning with white Egyptian eyes; fat Maria and her puny Portobello sidekick in matching mother-hubbard; ambisextrous Dominique, head shaved to the scalp, hand in hand with her boys and girls; funny, sad little Danny the German hobbit with his thin, beautiful Mary, always weak with hunger; an English count in search of his morning marmalade; Julian Beck’s Living Theatre group miming Medea to the breeze at dusk. (Man! this is Matala, so do what you like here).

The jargon is eternally dated West Coast, the participants infinite hippies. And the conventionally-inhibited mortal looks on. We are − or are not − amused. But mostly we are amused, because the temperature is 98 degrees Fahrenheit and still soaring, the retzina is flowing, the tourists are filtering into the nearby village to stare − and the Matalans chuckle and gesticulate, play their pipes and dance to keep the mad damned touristi happy. Troglodyte and tourist are interdependent.

To complete the scene: cats. How does one encompass a Greek cat, from its mummified Egyptian stringiness to its preoccupation with dust and snakes? Or the ululating Cretan dog, mulish ears and cheerful homosexual feats out in the midday sun? Soporific voices among the whirring cicadas, murmuring French and California and Greek. Faded memories of World War II on the creased cheek of every fifty-year-old peasant who professes a little German.

Matala is wild summer seas, driving sandstorms, pulsating heat and the ever-burbling generator in the distance. Matala is the sunset strange and splendid, a sudden dropping blaze-ball into the indigo sea and lingering chiaroscuro of glowing mountain cameos. The night sky − how does one make comparisons? A glittering arm stretches its finger tips over the sky to touch the horizon. It is the Milky Way, and the shooting stars are Perseids. At Matala there are more stars than there are fossils jewelling the cliffs.

And with the night comes Minola and his famed tomato omelette and hot baked bread, the aroma mingling with the heavy, pungent scent of Lebanese Black and Acapulco Gold. Matala glows − and fun-finity begins.